It’s a regular day at Al-Nithamieh Girls’ School in the East Jerusalem neighborhood of Beit Hanina. When a teacher calls for order, the students squeeze themselves into one of the school’s most overcrowded classrooms.

“Nadeen, Nadeen, move the book!” the teacher calls to a student. Schoolgirls instinctively pull books and papers off their desks as another girl scrambles across desktops to reach her seat. They are sardine-packed five to a table that is just wide enough to fit a textbook. Walking space between the desks is nonexistent.

The school is among eight recently visited by DCIP across East Jerusalem, six public and two private. Every administrator reported that they struggle with severe overcrowding and have done so for decades.

Jerusalem’s municipality estimates a shortfall of 2,000 classrooms for East Jerusalem students, rights group Association for Civil Rights in Israel (ACRI) reported. As a result, municipal public schools only serve 41 percent of the Palestinian student population, according to ACRI. And they are bursting at the seams.

In the tightest classroom at Al-Nithamieh Girls school, a 15-square-meter (161-square-foot) classroom holds 26 students and 1 teacher, yielding approximately half a square meter (6 square feet) per student.

Administrators told DCIP they are forced to turn new students away.

“I can't really say that I receive a good education, despite the teacher’s great efforts,” said Reem Ghuneimat, a 16-year-old student at the school. “The classroom is really not suitable. It’s a stressful environment because of overcrowding.”

Under international law, access to education is a human right for children. Israel, as the Occupying Power in East Jerusalem, must ensure this right for Palestinians there.

Israel does not deny responsibility for Palestinian children’s education in the city, either. Israel’s High Court of Justice in 2011 stated that both the Jerusalem Municipality and the state had repeatedly failed to build enough public school classrooms to serve East Jerusalem students, in violation of Palestinian children's’ right to education.

Jerusalem Mayor Nir Barkat famously called Jerusalem’s residents “ all my children” in a 2017 interview and pledged to “close gaps for all neighborhoods.”

So why are classrooms still so hard to come by?

Israel’s discriminatory development plans and budgeting toward the Palestinian education sector in East Jerusalem have effectively barred proper growth. As a result, Palestinian children end up in some mix of sub-optimal scenarios: packed into overflowing schools, studying in inadequate or unpermitted facilities, pushed into tuition-based schools, or out of education all together. 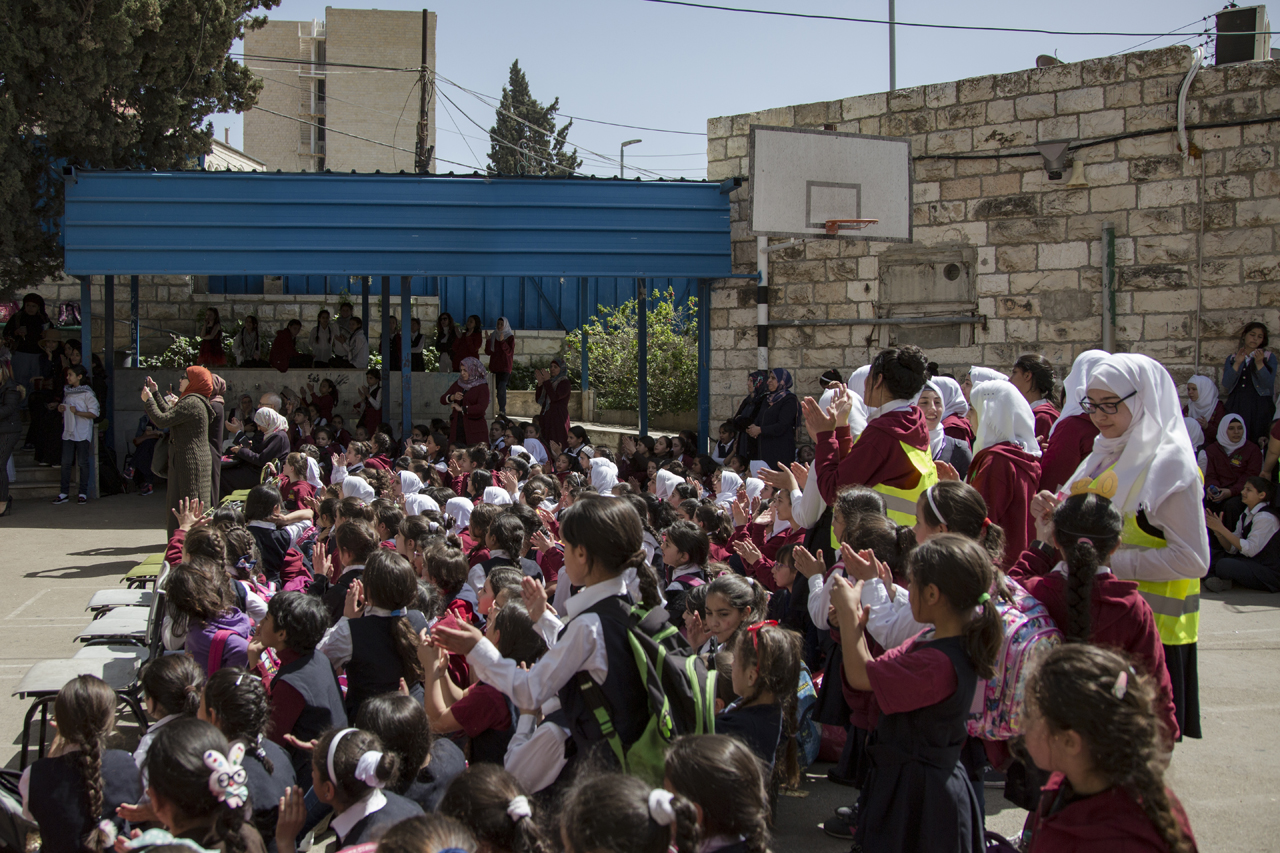 In order to build or expand a public school, a permit must be obtained. However, permits may only be granted in line with existing development plans. Just 2.6 percent of all land in East Jerusalem is zoned for public buildings in Palestinian areas, according to Ir Amim. Under such limited zoning, legal construction of new schools is near impossible.

While more than half of the city’s classroom shortfall is in East Jerusalem, just 16 percent of the funding that the Jerusalem Municipality requested for classrooms went to East Jerusalem in 2017, according to Ir Amim.

The East Jerusalem schools that do exist are scrapped together, wedging students in wherever there is space. They often fail to resemble schools.

Five out of the eight schools surveyed by DCIP, including four public schools, were inside of or included buildings that were not originally designed to be schools.

Half of the schools that DCIP visited completely lacked libraries and computer labs.

East Jerusalem’s Al-Fata Al-Lajia Girls School - C is one of them. The school was established in a multi-purpose building that also houses a mosque. The 113 students who attend the school must enter through a shared public entrance that opens onto a busy main street.

“What we need is a new building designed and equipped as a school,” the school administrator told DCIP. “What prevents the school from meeting the full range of students’ needs is the lack of space and facilities.”

The school was also among three to report little to no outdoor yard space for sports and games.

Following expansion efforts, three out of eight schools surveyed by DCIP reported their facilities were split between different structures. Al-Nahda School - A, for example, is separated into two buildings in East Jerusalem’s Old City. Students must traverse militarized environments in the ten minutes it takes to reach the other building by foot.

“What we need is a new building designed and equipped as a school,” the school administrator told DCIP.

“It is not safe given the tense and unstable situation in the Old City because there are always Israeli soldiers,” student Rasha Rajabi explained.

Another school DCIP visited, Al-Fata Al-Lajia - D, faces demolition. The school is a converted residential building in the Wadi Al-Joz neighborhood. The top floor, which now holds a computer lab and three classrooms, was built without a permit ten years ago, the school said.

"Every year in November, I get worried and anxious out of fear that the court will decide to carry out the demolition order. It would be a catastrophe and cause psychological and practical difficulties for students in school," the school principal told DCIP.

The United Nations Office for the Coordination of Humanitarian Affairs in March identified eight East Jerusalem schools “at risk of full or partial demolition due to outstanding demolition orders.”

Unofficially recognized schools and the high drop out rate

Between the clear categories of public and private schools, a third distinct type of school exists in Jerusalem: “unofficial recognized” schools. These schools are somewhere between public and private. They are established privately, often by non-governmental organizations, but receive partial municipal funding.

Unofficial recognized schools have burgeoned in the vacuum left by the municipality in East Jerusalem. They are often in converted residences and have been criticized for offering a sub-par education while charging a tuition. About 40 percent of the Palestinian school population in East Jerusalem attend them.

Although this category of school also exists for Jewish students in West Jerusalem, there, unofficially recognized schools function more like schools of choice. Many Palestinians in East Jerusalem are never provided a seat in the free public school system to begin with.

While municipality has fee regulations and caps on unofficially recognized school tuitions, for the 76 percent of East Jerusalem families under the poverty line, this expense may still be insurmountable. Some 17,717 Palestinian children aged between 3 and 18 in Jerusalem are not registered in any known school at all.

Many Palestinians in East Jerusalem are never provided a seat in the free public school system to begin with.

Documentation by Ir Amim shows 33 percent of students in East Jerusalem’s public schools do not complete 12 years of education, compared to under 2 percent in other localities administered by Israel’s Ministry of Education.

Despite the municipality’s neglect of East Jerusalem students, there is one aspect of their schooling that the Israeli authorities do invest in: the curriculum.

The Israeli Ministry of Education said the aim of the plan was to “improve the quality of education in East Jerusalem.” However, rights groups widely criticized the curriculum for its failure to mention Palestinian history and said it could impact Palestinian children’s connection to their heritage.

To Palestinian students in occupied East Jerusalem, Israeli city authorities have made one message clear: their education is not a priority. As long as the municipal budget marginalizes East Jerusalem school needs and planning zones curb facility possibilities, children across Jerusalem will keep carrying their backpacks to unequal learning spaces.