The old stone walls of Mascobiyya detention center stand covered in barbed wire, wedged between the two realities of East and West Jerusalem. Palestinian teenager Mahdi Q. is sitting blindfolded and bound on the floor of an Israeli interrogation room. It’s 6 a.m. on a Tuesday.

He was detained from his bed two hours earlier, on November 14, 2017. “Israeli police forces stormed the house. I was shocked when they woke me up and ordered me to get up because they were going to arrest me,” Mahdi told Defense for Children International - Palestine.

“I changed my clothes very quickly and said goodbye to my family. They tied my hands with a single plastic cord and took me out of the house,” the boy said.

The police drove around the Palestinian Silwan neighborhood, located in East Jerusalem, for around an hour with the 14-year-old in the back seat before taking him to Mascobiyya. He would soon suffer physical abuse during a two-hour interrogation without the presence of a parent or lawyer, and spend 10 days in detention.

Mahdi was born and raised in East Jerusalem. Unlike the rest of the occupied West Bank where Israel applies military law, Palestinian residents of Jerusalem live under civilian law. This distinction dates back to 1967, when Israeli illegally and unilaterally annexed East Jerusalem.

Last year, Israeli forces carried out 472 search and arrest operations across Palestinian neighborhoods in East Jerusalem, according to the UN Office for the Coordination of Humanitarian Affairs (OCHA), and arrested 1,217 Palestinians.

Mahdi was among at least 322 Palestinian children detained in Jerusalem last year, OCHA told DCIP. These children’s rights should be protected by Israel’s Youth Law. In theory, it provides special safeguards and protections to children in conflict with the law, in recognition of children’s unique vulnerability and needs.

Two key protections of this law include advance notice before questioning takes place, and the presence of a parent or adult family member during questioning.

But law enforcement can legally side-step these safeguards under exceptional circumstances, according to clauses found within the Youth Law as well as the Criminal Procedure Law. By definition, exceptional circumstances meriting the removal of these protections should be statistically rare, with most children receiving the protections the law sets out. 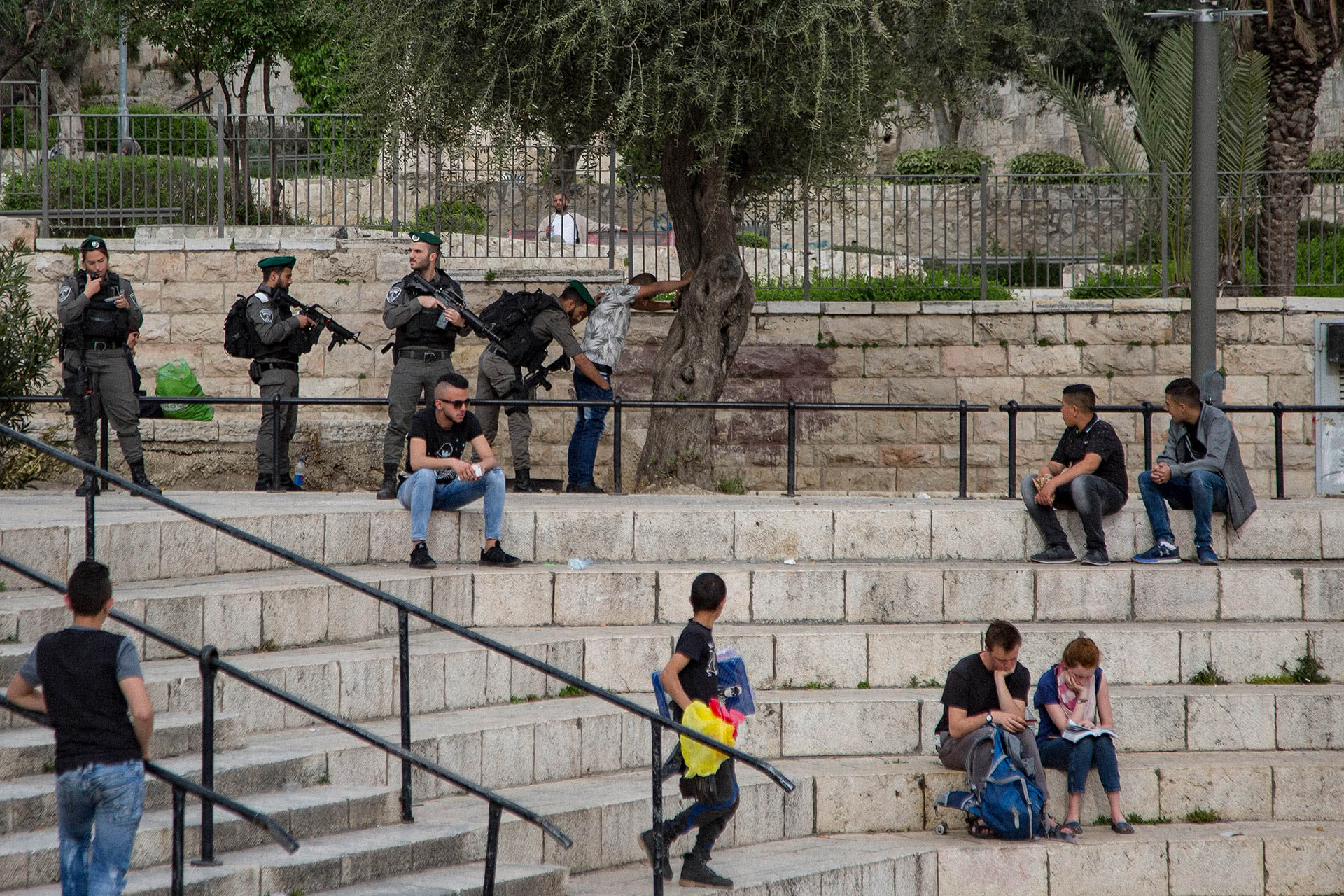 Mahdi’s arrest well illustrates these risks. Instead of advance notice and interrogation in the presence of a family member, he was arrested in the middle of the night and physically assaulted while alone with an interrogator.

The Association for Civil Rights in Israel (ACRI) expanded on the purpose of the Youth Law’s ninth article, which calls for the use of summons in the arrest of a minor, in a 2011 report. “The use of summonses for questioning, carried out in an orderly manner, is particularly important in the investigation of minors, since it allows the young person to mentally prepare for the interrogation, and allows the parents to make the necessary arrangements so they can accompany their son or daughter and be present during questioning,” explained ACRI.

The police said they detained Mahdi at night due to security concerns, according to Mahdi’s lawyer, DCIP’s Farah Bayadsi. Israeli police had received an arrest warrant the night before they detained the child, based on secret evidence, Bayadsi said.

But Bayadsi said the 14-year-old could not have posed an immediate threat when he was sleeping in his bed at the moment of arrest. Moreover, the offense he was accused of had taken place more than two weeks earlier, Bayadsi added.

Bayadsi also said Israeli police claimed to have filed a form explaining the reason meriting denying parental presence during his interrogation. However, Bayadsi was not permitted to view the form.

The presence of family member during interrogation can help guard against other rights abuses. With this protection removed, Mahdi was interrogated alone.

Mahdi was able to speak to a lawyer over the phone for a few minutes prior to his interrogation. However, under the Youth Law, the right to legal counsel does not extend into the period of interrogation, in contravention of international law principles.

The interrogator accused him of throwing Molotov cocktails but Mahdi denied it. “He slapped me and shouted at me, telling me to confess. I had to confess because I was afraid he might hit me again,” Mahdi said.

“He slapped me and shouted at me, telling me to confess. I had to confess because I was afraid he might hit me again,” Mahdi said.

The interrogator forced Mahdi to sign a confession in Hebrew that he did not understand, according to Mahdi’s testimony to DCIP. Bayadsi said this statement was later used against Mahdi in court, even though she raised the issue of the coercive measures used to acquire the confession before the court. He was placed on house arrest with a bail payment of NIS 2,000 ($580) on November 24.

Cases like Mahdi’s, where “exceptional circumstances” bypassed critical safeguards the Youth Law lays out, should be few and far between. However, DCIP analysis of 53 cases of Palestinian children detained from East Jerusalem by Israeli forces between between 2016 and 2017 found “exceptions” were routine.

Only four of these children received a summons or advance notice prior to interrogation.

Instead, Israeli police arrested approximately 40 percent of these children from their homes at night, between midnight and 6 a.m. Some 80 percent of these children were detained on suspicion of throwing stones or Molotov cocktails, like Mahdi. While Israeli law allows an officer to detain a child on the spot if the officer witnesses the offense, Bayadsi said these same offenses do not warrant arresting a child from bed, hours or days after the fact.

Significantly, only one of the 53 children had a parent present during interrogation. The interrogator asked this parent to leave after a portion of the questioning, then continued to question the child alone in the room.

These practices expose children to a host other risks and abuses, including physical violence, torture, coercion, and the long-term impacts of trauma.

Of the 53 children, DCIP documented 18 cases where children suffered physical abuse during the interrogation phase, including the use of stress positions.

The prohibition against torture applies to any act by which severe pain or suffering, whether physical or mental, is intentionally inflicted on a person to obtain information or a confession, under the UN Convention against Torture and Other Cruel, Inhuman or Degrading Treatment or Punishment.

More than half of the children were subjected to verbal abuse, threats, or intimidation during interrogation. These included vulgar language, threats to detain family members, death threats, and threat of sexual assault or other forms of violence.

At the end of interrogation, the majority of the children signed documents in Hebrew, a language many Palestinian children cannot read.

In its updated form, the Youth law was meant to recognize the “importance of the use of legal tools for the purpose of the defense of minors,” and bring Israel’s juvenile justice standards in line with international law and principles.

Under the Conventions on the Rights of the Child (CRC), the arrest of a child should be a last resort and for the shortest appropriate duration of time. The child’s best interests should be the primary consideration guiding treatent of a child deprived of his or her liberty.

The CRC also provides that children should not be “compelled to confess” and prohibits any “cruel, inhuman or degrading treatment or punishment.”

However, Israeli police’s treatment of these 53 children from East Jerusalem stops miles short of these provisions, as set out by the CRC, which Israel signed in 1991.

“In practice, these exceptions have became the general norm,” Bayadsi said. “The result is a system that protects Palestinian children in Jerusalem deprived of their liberty on paper, but not in real life.”