Nervous but exhilarated, Ghaleb Shaaban finished fastening the wide belt of his traditional costume. It was his frst big dabkeh performance, a folkloric stomping-based dance that is thought to have originated in old house buildings practices. While many dance dabkeh at weddings, tonight the dance would strike a different note, preserving a collective cultural history.

“When I’m on stage, I feel like I own the world,“ Ghaleb said. “I joined the group because I love dabkeh and love presenting my culture.”

He and the rest of the troupe had been practicing twice a week all year to synchronize their footwork and develop strong lines.

Family and friends had already started gathering the hall in late October 2017 to watch the 16-year-old perform. But when he headed for the stage, an armed member of the Israeli forces ordered him to leave the theater.

“When I saw the soldier, I went back to the changing room to put my regular clothes back on,” Ghaleb told Defense for Children International-Palestine.

“The soldier followed me into the changing room. He pulled me from the back of my neck so aggressively that my button ripped off,” Ghaleb said. “He ordered me to leave and pushed me out of the room.” 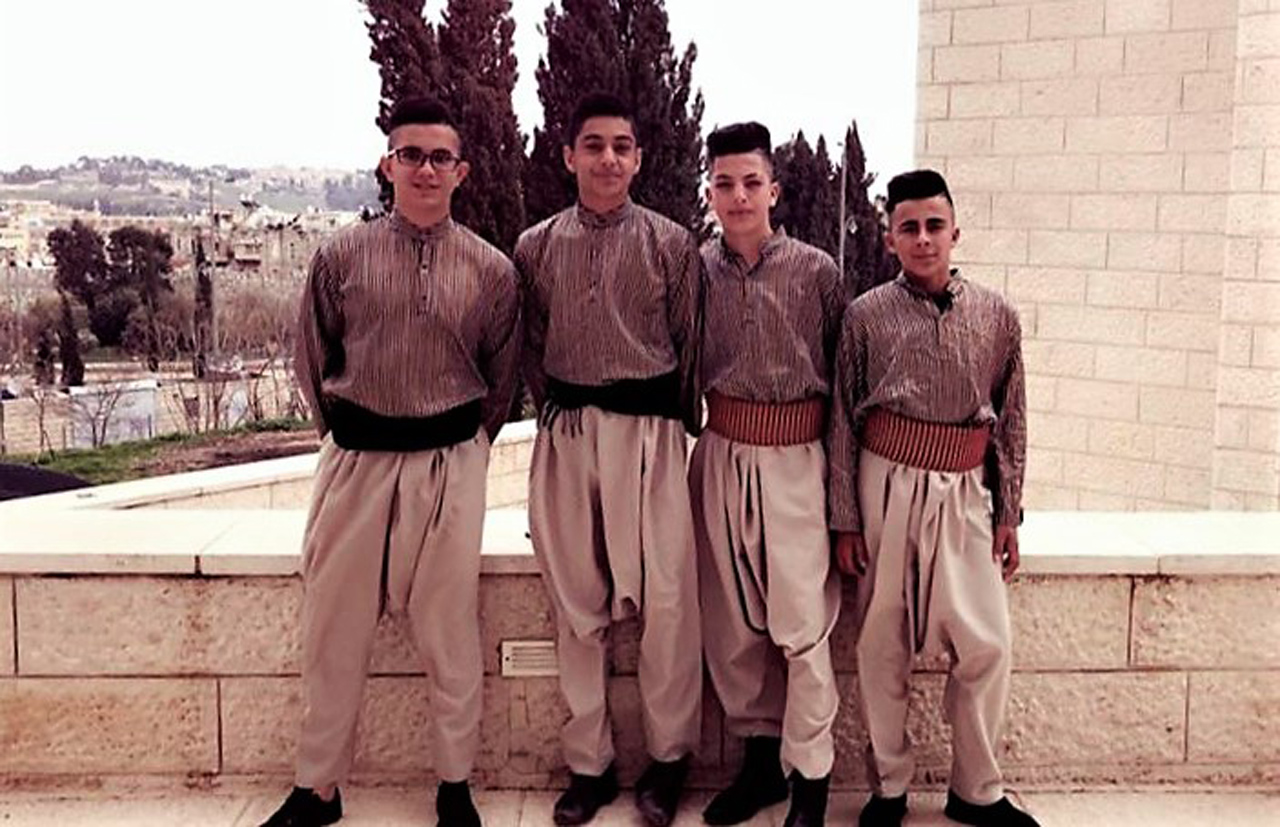 Other team members were still in the dressing room, including one of the troupe’s younger members, 13-year-old Hala Maragha.

“Suddenly the coach burst in and told us not to change and to leave the theater,” Hala said. “When we went out of the dressing room, we found around 50 members of the Israeli forces there. We realized that our performance was being banned.”

The forcible cancellation of the performance left the dancers disheartened.

“When we went out of the dressing room, we found around 50 members of the Israeli forces there. We realized that our performance was being banned.”

Hala said that her membership in the Al-Quds Group for Palestinian Folklore meant a lot to her. She had worked hard not to miss any of the practices. “I love our folklore. This group allows me to express my love freely,” Hala told DCIP.

It was not the first time the group had been banned from performing. Nor was it the first time that the doors to the northern Jerusalem-area performance space, Al-Hakawati Palestinian National Theater, were shut by force. In 2013, international media outlets carried the story of Israeli authorities cancelling a children’s puppet festival at the theater.

Israeli authorities frequently close Palestinian cultural institutions and suppress speech, in violation of Palestinians’ right to freedom of expression. Cultural events, artistic performances and social media posts are among activities that Israel heavily scrutinizes and even criminalizes in East Jerusalem.

Al-Hakawati was established in Jerusalem in 1984 as the Palestinian National Theater, to create a safe place for Palestinian creative expression. The theater boasts a diverse range of programming throughout the year, including theater, dance, music and puppet performances. Both children and adults have opportunities to step onto the theater’s beloved wooden stage.

To many locals, it is a cornerstone of cultural life. The theater has also drawn international recognition and praise. But the pursuit of free artistic expression has not be untroubled.

“Throughout the 34 years of Al-Hakawati, it has been forcibly closed an average of three to four times each year,” said Amer Khalil, the director of the theater. 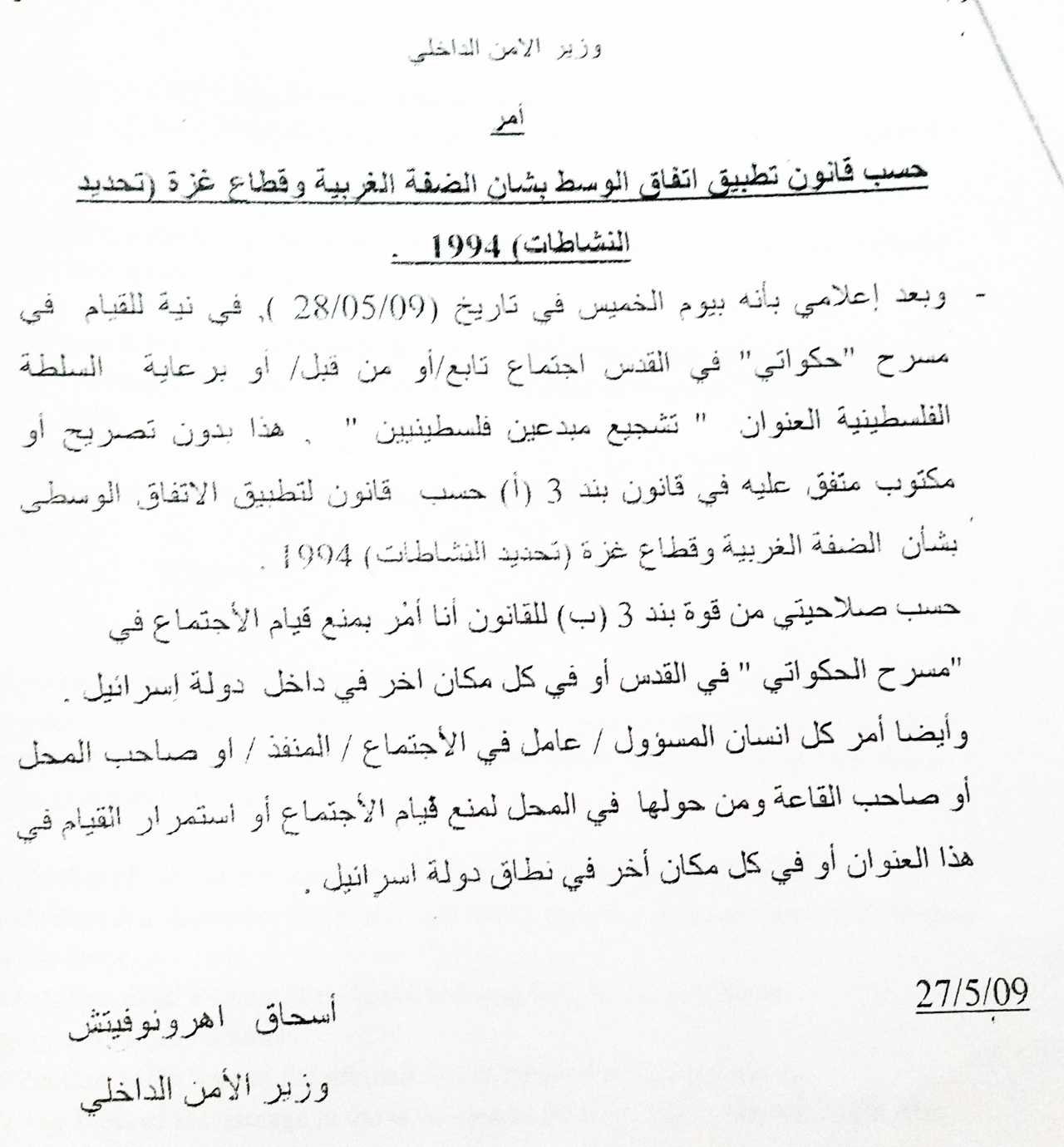 Khalil showed DCIP an example of a closure notice, noting the orders typically cite provisions from the Oslo Accords.

“The reason for the theater’s closure is usually that the activity done or to be done is organized or funded by an unwelcomed and unlicensed group,” Khalil told DCIP. He explained that this “unwelcomed group” is the Palestinian Authority, which often financially supports their performances.

The Palestinian Authority was established in 1994 as a result of the Oslo Accords. Article 3(a) of the Implementation of the Interim Agreement on the West Bank and the Gaza Strip (Identification of Activity) Law of 1994 states that no event organized, supported or funded by the Palestinian Authority shall be conducted inside the State of Israel without written approval from Israeli authorities.

Israel illegally annexed East Jerusalem following a military takeover in 1967 but the international community never recognized the move. Nonetheless, Israel unilaterally declared East Jerusalem to be part if its territory.

In 2009, Israeli police spokesperson Micky Rosenfeld told the Electronic Intifada that Israel would halt any event taking place in Jerusalem “that is organized or financed or backed by the Palestinian Authority.”

Such actions have widely impacted the ability of Palestinians in East Jerusalem and to enjoy their freedom of speech and expression. According to the Civic Coalition for Palestinian Rights, at least 32 public institutions and non-governmental organizations in East Jerusalem were temporarily or permanently closed by Israel between 2001 and 2017.

Freedom of expression is a universal right, as indicated the International Covenant on Civil and Political Rights. Article 19 states that this right includes the “freedom to seek, receive and impart information and ideas of all kinds, regardless of frontiers, either orally, in writing or in print, in the form of art, or through any other media of his choice.”

Suppression of freedom of expression is not only seen in closures and bans on Palestinian organizations and performances.

Policed speech and beaurocratic assaults on Palestinian spaces are symptoms of all that is going wrong in East Jerusalem.

“It’s really hard to live in a place where you are not allowed to express yourself freely,” said Hala.

Policed speech and beaurocratic assaults on Palestinian spaces are symptoms of all that is going wrong in East Jerusalem. Under Israel’s discriminatory policies and laws, this Palestinian community is under perpetual pressure to live out their lives in shrinking spaces, even as Jewish-only settlements expand around them. They are stuck paying taxes into a municipal pot that will not build classrooms for their children or fill potholes in their streets.

If, in the midst of all this, they gather to dance and sing the old songs, they know the night may be cut short and the audience escorted out.